How do you guys think?

Why was the MEGAMAN series stagnating for so long so much?

Really long It was not a new work.

In this time it is comparatively serious

Why the MEGAMAN series was stagnant,

I want to seriously consider it.

Tomorrow is the time now,

I want to celebrate.

Actually, how do you think my brother?

If you say the latest work in MEGAMAN 11 or earlier,

Except for MEGAMAN Legacy Collection,

It’s about MEGAMAN crossover, is not it?

There are few action elements,

It was a new work in the form of a smartphone game.

If you do not know Mega Man,

Although it may do downloading,

Was it a regret feeling was stronger?

To be honest I think so too.

However, at this time the popularity of smartphone games,

At the time of the explosion,

The answer of Capcom trying to follow such an era,

I think that it was such a form.

After all the older brother played this game?

I did not know even existence.

An elder brother who likes an action ga

I can not think of a smash game.

I did not get any information before that.

For a long time no new work comes out,

I also gave up completely,

It is doubtful whether I had a smartphone at that time.

In the past there were two child magazines,

It is doubtful whether it will appear in game magazines now or not.

Unless you put up an antenna in a general-purpose portable device,

Knowing itself was difficult.

By the time I knew existence,

The delivery was over.

It is a stubborn era.

As a reason why this game appeared,

It is thought as the reason why it did not appear for a long time,

I think that the demand for action games is decreasing largely.

I think that prejudice is also mixed,

A game casually attracted to the package and won,

What a role-playing game was is Zara.

A work called an action game,

It also changed to a type that runs through 3D space,

It will be a big factor.

Did MEGAMAN not be born again in 3D?

It was born with that approach,

It will be MEGAMANX 7 or DASH series.

In addition to not being able to grasp the user’s mind,

I could not sell it, it was full of problems as a work,

It has become one factor to cause the series to collapse.

Yes, one of the reasons why MEGAMAN’s latest work did not appear for a long time,

I could not keep up with the changes of the times.

Certainly MEGAMAN has no good memories for 3Dization.

However, this is only one reason for the decline of MEGAMAN.

There are two other reasons.

Are there still two?

According to MEGAMAN restart,

After the planning of MEGAMAN DASH 3 became an unwilling form,

Although many of the staff want a new work,

It is undeniable that there was air called spicy brand saying to make themselves.

It is certain that the project of MEGAMAN DASH 3 failed,

Until then, although opening a period and a period,

Because new work was out for the time being.

And finally, it is another reason.

Mega Man was too complete as a 2D action game.

Needless to say, Mega Man was born as a 2D action.

However, Nintendo products such as Mario and Zelda,

There was a definite difference.

Is that the difference?

The way Mega Man attacks is a gun if it is said.

It shoots with the difference in elevation, defeats enemies, and progresses the stage.

As well as the completeness of this system itself,

Mr. A ﾂｷ K thought of as the parents of all,

Various elements that make players crazy get mixed up,

It was Mega Man that was completed.

If it is not a 2D action, it is a fun that can not be expressed,

It became a wedge too.

Sorry, I do not quite understand what it is.

Because the times have changed and 3D has become commonplace,

I can not evolve even if I want to evolve.

It will lead to destruction of gaming ability when it is 3D.

I got stuck in the dead end of evolution.

I have been waiting for new works,

But, with the 2D action fiery,

I do not know whether I can make profit even if I make it.

The series themselves have gambling elements.

Do you restart Mega Man in such a time and are you OK?

To tell you the truth it has to be said that it depends on Capcom.

I was blessed with the times, I could not evolve,

It can also get involved in failures of the same series.

It is exactly triple.

Mega Man, except for EXE and DASH,

It can evolve only in the form of 2D action.

Because of the circumstances that failed to evolve,

I think that Mega Man had only to go to sleep.

What we can do for our users,

It is only to accept it.

Of course, unless the game itself is interesting,

That does not go away either.

But now, will big companies become serious about such a series?

Even MARVEL VS. CAPCOM: INFINITE,

You made a user angry with poor mobility.

Probably I do not need to worry about that point.

In the first place Capcom is a fighting game business,

I completely threw it to the USA,

It probably will not be anything,

Mega Man 11 is completely made in Capcom (= made in Japan)

Core staff who have long been involved in Rockman,

Because I collected it,

I think that there is no problem as to the result.

By the way, big brother,

The creator of Mega Man,

Is not it Keiji inahune?

No, they are completely different people.

Then, why did this person make Mega Man?

As I start talking about it, it is going to be long, so this time.

Thank you for your viewing.

You will be encouraged if you press the high evaluation button too! 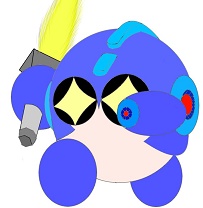